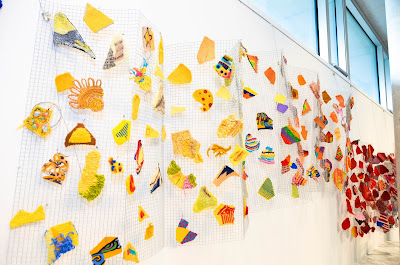 The Roscommon Lamb Festival is an annual event in Roscommon Ireland. A couple of years ago, Frances Crowe saw this community event as a way to showcase the work of Irish and Scottish tapestry weavers and organized an exhibition called InterConnections 1. This year, she made it into a larger event, with much more scope by pairing with the town to create the International Fibre Arts Festival, which featured not only anything agricultural related to sheep and lambs, but also two tapestry exhibitions including the Fate, Destiny and Self Determination installation  exhibited at the Roscommon County Council building, and  another InterConnections 2, with the recent tapestry work of Joan Baxter, Terry Dunne, John Brennan, Frances Crowe, Mary Cuthbert, Angela Forte, Amanda Gizzi and Elizabeth Radcliffe. Included was a symposium where tapestry weavers talked about their work, and a workshop called Weaving Green, lead by the much respected Joan Baxter, who wove for 8 years on the Henry Moore tapestries at West Dean in Chichester, along with the colourful and humourous John Brennan, both Scottish. 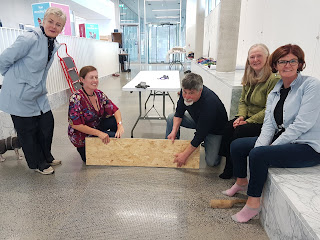 a link to a 30 second clip of us setting up.
https://www.youtube.com/watch?v=AYlDZsA2Er8 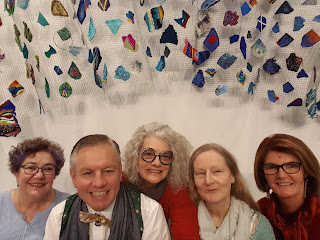 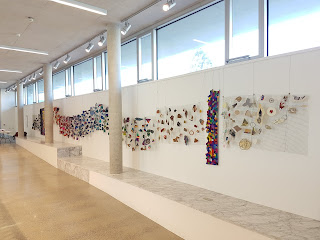 The challenge that faced us was that we could not pin the shapes to the wall. We used hardware cloth folded like an accordion and used safety pins to attach the shapes to the gridlike structure. It was hard on our hands and fingers.It wasn't an ideal solution but the effects are quite stunning all the same. Many people said that they thought this was the best version of the installation so far. Pictures below are to help you locate your piece(s). 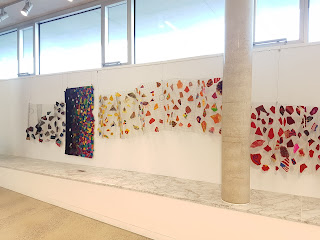 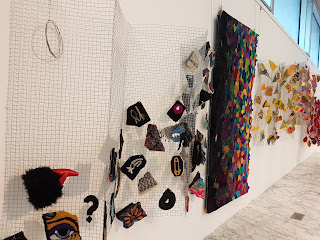 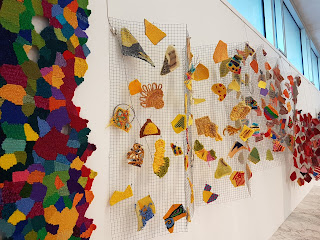 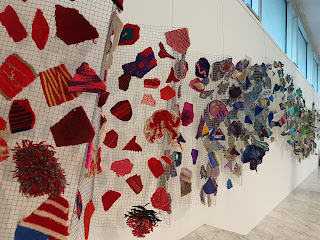 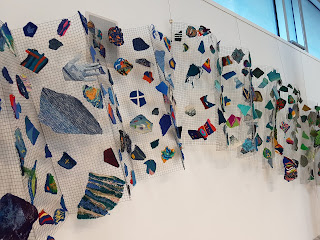 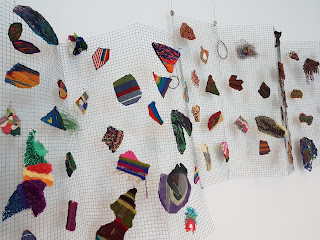 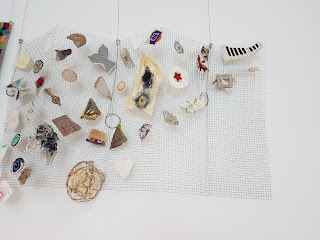 below, a video of the installation to help you find your piece(s) more quickly 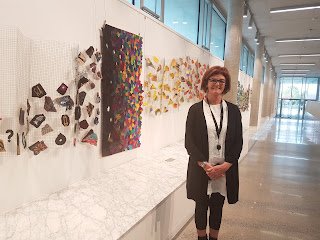 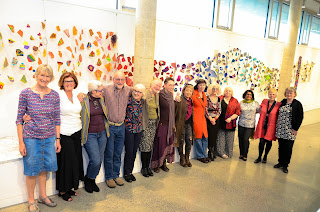 It was a real thrill to have all these people who participated in the project, be present for it's opening in Roscommon Ireland. From left to right: Tish Caniffe, Frances Crowe, Angela Forte, Terry Dunne, Frances Leach, Susan E. Middleton, Uisce Jakubczyk, Magenta Kang, Louise Boughton, Line Dufour, Clare Coyle, Arune Reddy, Veronica Collins and Margareta Sorlin. Although not in the photo, Anet Brusgaard and Bambi Rutledge were also present.They came from Ireland, England, Scotland, Canada, Denmark and Sweden. 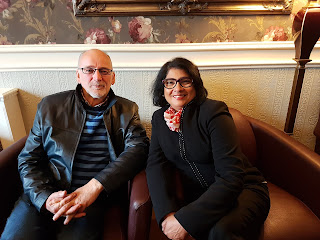 Terry Dunne came from Cork to help out. Aruna Ready not only came to be present for the FD&SD exhibition and other activities, she had come all the way from London England to help launch it's very first exhibition in Toronto at Craft Ontario in 2014. 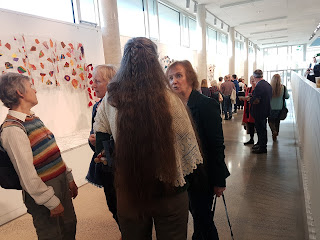 About 100 people showed up for the opening. 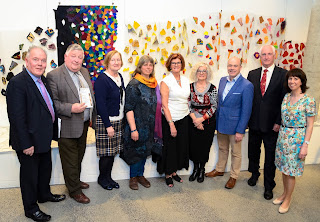 There was an official opening ceremony with important government officials in attendance. I was very glad to meet Pascale de Coninck from Dancing Threads studio, originally from Belgium but now living in Cork, Ireland. She managed the Timelines community tapestry which was on display alongside the Fate installation. She is fourth from the left. 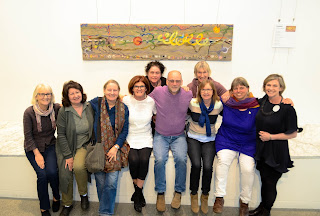 Speeches were given at the opening reception for Fate, Destiny and Self Determination (and Timelines) including one by Anet Brusgaard from Denmark, co-founder of the European Tapestry Forum. Her praise for the project left me speechless, humbled and almost in (joy-filled) tears. I am very grateful Anet! 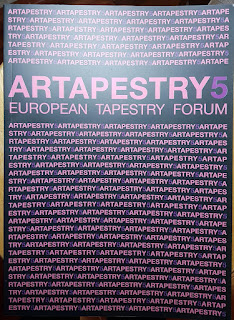 Anet had asked me last year to write an essay on FD&SD for Artapestry 5. If you'd like to read it contact me or order your copy of the catalog from Anet. 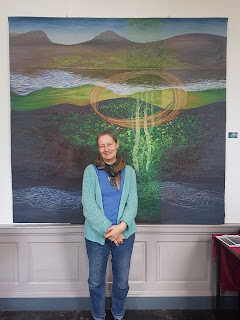 The Interconnections 2 exhibition was held at King House Boyle in Boyle, Co. Roscommon Ireland,  while FD&SD was being exhibited. First built in 1730 by the King family dynasty, it has been restored to it's former glory by the Roscommon County Council. Joan Baxter stands in front of her tapestry Hallaig 2, measuring 2m x 2m. 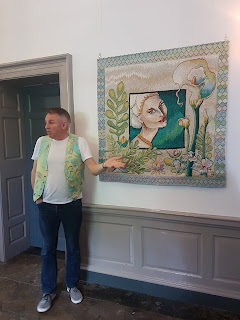 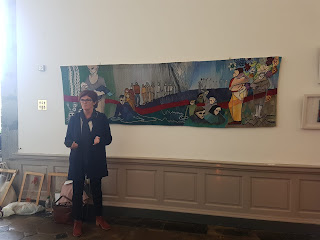 Frances Crowe in front of her tapestry Displacement, inspired by the Syrian refugees and it's similarity to the plight of Irish refugees between 1845-49. 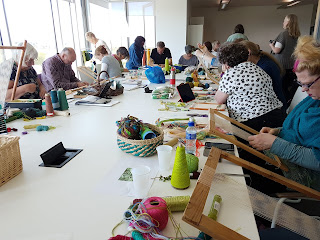 The workshop, with the theme of Weaving Green, was led by both John Brennan and Joax Baxter. 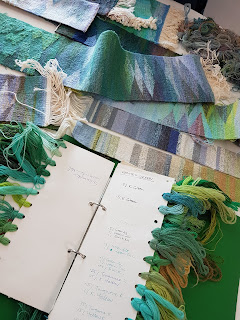 Some of the tapestry samples created by Joan Baxter. She dyes all her own yarn. 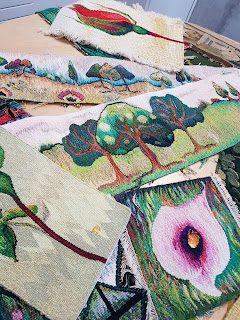 John Brennan's samples. He used an assortment of yarns to create rich textural effects and a dynamic interplay of colour.

The exciting tapestry event, Project BaaBaa scheduled for May 2020 in Galway Ireland, has been postponed to May 20...

Line Dufour
Line Dufour has had numerous exhibitions including in the USA, Canada, and China. Her work can be found in many collections which include several commissions. Numerous publications have spotlighted her tapestries including Barty Phillips book Tapestry, published by Phaidon Press which placed her in the Contemporary Masters Chapter. Dufour’s recent international tapestry installation, Fate, Destiny and Self Determination has been featured in Fiber Art Now, HandEye magazine, Fibre Focus, American Tapestry Alliance, fibreQuarterly, the Danish textile art publication, Rapporter and the British Tapestry Group publications authored by Emma Jo Webster and Aruna Reddy. This installation has been exhibited in Toronto, Montreal, Vancouver in Canada, in Denver Colorado and San Jose California USA and has numerous exhibitions booked for 2017, 2018 and 2019, including at the World Textile Art event in Montevideo, Uruguay and the Tuch + Technik Textilmuseum Neumünster Germany.